I just finished Bioshock Infinite. I imagined. I hoped. I dreamed it would be a pleasant experience. I never, ever could have imagined it would be THIS CRAZY GOOD. I guess I am also not Ken Levine and also not a complete and utter GENIUS. The game is beautiful on an artistic level. It’s minutely detailed and atmospheric. It’s the kind of game you could spend many hours exploring. But the beauty of the game has nothing on the story and the amount of detail and precision that went into crafting a brilliant fiction. 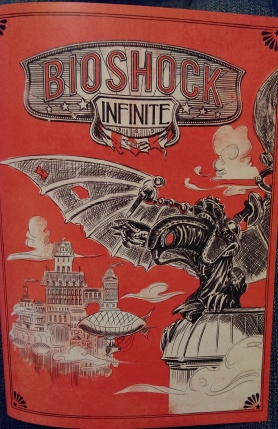 Now, I am going to discuss some SPOILERS. Do not read further if you do not want to be SPOILED.

THERE WILL BE SPOILERS BEYOND THIS POINT. ALL YE WHO DO NOT WANT TO BE SPOILED TURN BACK NOW.

Okay! So, I feel like I could write this entire reaction in all caps. I have not been so blown away by a twist ending in a very, very long time. I thought the end of the first Bioshock was good. It has NOTHING on Infinite.

Time travel is complicated. There’s the whole idea of crossing one’s own timeline and how that makes matters difficult, creates paradoxes, all that. But Levine put together a universe of parallel worlds and made it seem effortless.

Booker DeWitt, my valiant, gruff hero whom I love so much is actually also the prophet Comstock?! AND Elizabeth is his/their DAUGHTER? WHAT? WHAT IS HAPPENING? WHAT IS LIFE?!

Dear lord, what AMAZING storytelling. It all makes so much sense when you stop and look back on it. The AD on Booker’s hand (for Anna DeWitt, his daughter who he gave away). Why Comstock knew so much. Why the Luteces were always there whenever you needed some guidance. Not just time manipulation but reality manipulation. There are infinite alternate realities where variables change, but certain things remain constant. To quote the lovely Elizabeth,  there’s always a man and there’s always a city. Booker comes to a cross roads after the Battle of Wounded Knee, either accept baptism and be reborn (as Zachary Comstock) or reject it and continue on as Booker DeWitt (gambler, ruffian, and depressive). In endless realities he is one or the other. In endless realities different versions of the story play out.

Also, how cool are the real world parallels that occur due to said time/reality travel. All the adapted musical renditions of modern songs (i.e., Tainted Love, God Only Knows, etc.) is because Fink’s brother traveled back in time and found them. Fink must have been to Rapture to create vigors (inspired by plasmids) and Songbird certainly has a thing or two in common with the Big Daddies.

The ending slayed me. How sad. How very, very sad. To stop it all from happening, to save Elizabeth from that misery, you have to kill Comstock, but to kill Comstock, you have to kill Booker because they are one in the same. Two sides of the same coin. It’s all based on perspective. And that’s the whole game; it layers themes of dualism, inevitability, fate, and probability. All those Elizabeth’s appear and step forward to drown him after revealing his true nature, his dualism. My words cannot properly describe the feelings of awe and incomprehension. I felt shell shocked. Neil pointed out that the Elizabeth that comes forward to drown you is wearing the opposite necklace than the one you pick at the beginning of the game. It’s not the same girl you had been with the whole game! Somehow, that’s even sadder. He doesn’t even get to see her one more time.

Also, the dramatics of the end totally wiped away everything that came before (which was quite a lot). There was an intense plot of xenophobia and racism (Columbia’s predominant trade). There’s a civil war and a lot of blood shed. But all of that pales in comparison with that final, shocking reveal.

But I think, overall, the game ends on a note of hope. If you watch all the way to the end of the credits, the scene opens up with Booker waking up on the same day he loses Anna, going into her room, calling her name, and seeing the crib. We don’t get to see what’s in the crib before the screen goes black. Ever the optimist in the case of fictional worlds, I like to think Booker wakes up in a reality where he never goes to any baptism and he is able to simply raise his daughter – no quantum physics, no alternate realities, just family. One can hope.

Can I also mention that I completely lost it when we just showed up in Rapture? Fangirling at its most potent, I must say. Even Rapture is a possible reality, a parallel universe. It has me so very pumped up for the Infinite DLC Buried at Sea. My biggest question is if Elizabeth and Booker will really be their story-related selves or if it will be a form of fan fiction. Things to be revealed!

Also, I loved Elizabeth. She was basically a Disney princess plopped in the middle of an action-horror video game. She was just so endearing, especially at the beginning of the game; so doe-eyed and eager. And then she changes and grows and becomes other as Columbia and the terrors of the game do their work on her. Like so many princess characters before her, reality is not as pleasant as one’s nice, safe tower. But again, we can hope that in the very end, the very, very end, she gets her happy ending.

I feel like that was barely coherent. I basically speed typed all my reactionary feels onto the screen and definitelu didn’t cover everything I wanted to go into. Welp, I suppose there is a time and a place for a word vomit. Until next time! xx