Growing up, summers felt impossible and infinite. Every day was taking you steps closer to a new school year, yet everything was golden. The sun was warm and time was yours to enjoy at your leisure: reading, running, playing, swimming. Summer nights were warm and full of laughter and secrets. There was nothing better than summer break, growing up. Winner of the 2015 Caldecott Honor and Michael L. Printz Honor, This One Summer by Jillian and Mariko Tamaki is a young adult graphic novel that captures a single summer in the life of one Rose Wallace. 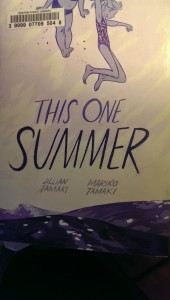 Rose and her parents spend every summer at Awago Beach, their home away from home. There Rose has her slightly younger, summer friend Windy as her companion and compatriot of the Awago experience. Everything begins the same, her dad cracking jokes, the air smelling sweet and salty, but something about this particular summer is different. Her parents, for one, won’t stop fighting, creating a constant tension. And Rose and Windy get ensnared by the local teens’ drama, a troubled and complicated tableaux the girls uncover little by little.

The novel is full of strong characters and engaging plot. It’s a quietly powerful book, slipping along at the pace of summer days, both languid and over before you know it. Awago is a magical place, an in between place, where time doesn’t quite match the outside world: it’s only sunny days, swimming, running, and gasping and laughing at scary movies with your friends. But the dark underbelly that plagues the novel is always surging beneath. It is a twisted pleasure to slowly uncover the secrets of Rose’s family and the heart of its unrest.

Rose’s parents have a complicated situation that is revealed slowly throughout the book. There is love there, but also a definite tension. For most of the book, as it is seen through Rose’s eyes, there is a resentment of her mother, Alice, who is going through some kind of depressive state that Rose definitely does not understand. Meanwhile, her father tries to make the best of it, cajoling his wife into some form of merriment, causing the tension to spike even further. There is so much more to this family than what is laid out on the surface. Alice Wallace is a fascinating character with so much more going on than what her daughter perceives. As in most mother-teenage daughter relationships, Rose focuses mostly on herself and her own problems, not realizing the seriousness of her mother’s grief.

Rose herself experiences a summer of change. She develops a crush on/morbid fascination with one of the local guys, a dude at the heart of a scandal she and Windy slowly learns more of as the summer wanes. This almost scientific interest in the older, local kids and their doings (sex and drugs, mostly) puts her at odds with Windy who isn’t quite at the age where she gets it. Windy is still grossed out by drinking and sex, while Rose seems to be entertaining certain ideas. Though, her obvious distance from and misunderstanding of these situations just shows how much Rose has to grow and how much she learns in this one summer. With knowledge comes a kind of heartbreak, but not the romantic kind, rather the kind of heartbreak that comes with not knowing what to do when it feels like the world around you is falling apart, the kind of heartbreak you only attain when your only option is accepting the darker parts of the world.

It is fascinating to experience the world through Rose’s eyes because so many of us have been there. A sort of innocence in us all gets lost at one point or another and often all it takes is one summer. I very much recommend this book. The art is absolutely gorgeous in and of itself, but paired with the writing, it is a force to be reckoned with. Jillian and Mariko make one hell of a team. This is a quick read, really good for summer (and timely too!). If you like young adult, coming of age stories and graphic novels, this book is for you.