The Internet is one of the most powerful and terrifying tools ever granted to humanity: all the world’s information at our fingertips, access to completely unfettered communication. It’s near miraculous. But the Internet also has a darjk side. It erects a barrier that allows for a distance and anonymity that has the unfortunate effect of letting society reveal its worst self. You are probably familiar with the cruelty and mercilessness of Internet users. But how about the shame? 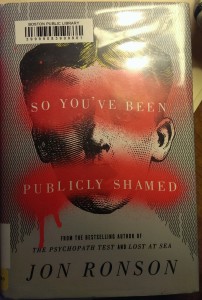 So You’ve Been Publicly Shames by Jon Ronson explores the horribly upsetting world of modern shaming on the Internet, specifically the madness wrought by Twitter and online forums. He discusses the cases of a host of people who have said or done something stupid online and was basically crucified for it. This is civilians ruining other civilian’s lives by public shaming: getting them fired, harassment, death threats, you name it. This kind of “in the public square” shaming harkens back to our ancestors and the pillory; the Internet allows a sort of mob to gather and completely destroy a person without feeling too bad about it. Ronson sheds light on the fact that these kinds of shamings have lasting effects on these people’s lives, both materially and emotionally.

It is difficult when the public becomes judge, jury, and executioner and take it upon themselves to decide that something someone has said or done is worth destroying them over. It is even more difficult when these mobs don’t realize that their comments and raking over has actually detonated these people’s lives.

There are so many interesting cases in this book. I won’t get too much into it for fear of spoiling the book, but the majority of the people who had their lives ruined by Internet shaming did not do much of anything wrong, with the exception of Jonah Lehrer, who really did make things up in his journalistic work (and even in his case, the public outrage seems way harsh). The people who have their lives blown up all seemed to have made a bad joke that didn’t go over well; the PC police were called, immediately indicted all parties, and started calling for blood.

I find this phenomenon fascinating, but also have great sympathy for those affected. Is one dumb joke enough to ruin someone’s life and career over? These are for the most part private citizens who aren’t used to such an intense level of public scrutiny. It’s a terrifying concept: maybe you could be next. It almost makes you want to stop going online all together.

Ronson is an excellent writer and his book has been fastidiously researched. He is engaging and thorough throughout. I enjoy his authorial voice as well as his speaking voice (do check out any of his radio pieces; they are excellent). I highly recommend this book. It’s a quick and devastatingly interesting read, well worth your time. Can’t wait to check out more of his book!

Until next time.
xx