Kurt Vonnegut is a  bizarre, wonderful madman. His novels often read like fever dreams, something touching on reality, resembling it, but only just. It never quite gets all the way there. There is always something in the story that makes the reader stop and go, but wait! Something is not right here. And sometimes that something is subtle as hell. So it goes in Cat’s Cradle. 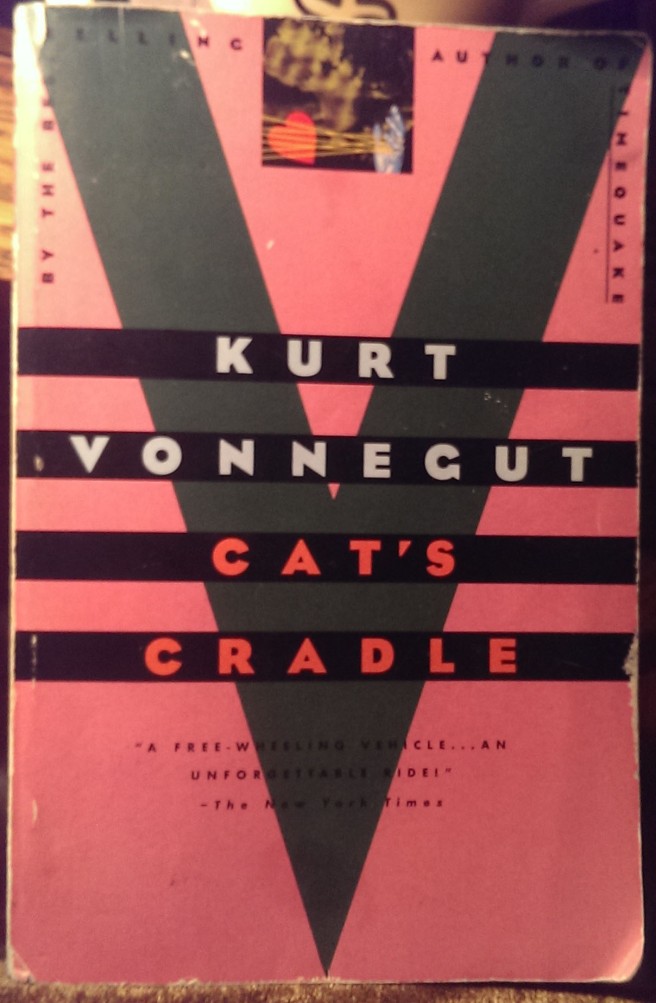 This novel is one of those books where I was tempted to look everything up to see what was true and what was fiction. It’s written in a memoir style, which lends the story an authoritativeness and plausible credibility that nicely juxtaposes the utter incredulity of the story.

The novel follows our protagonist and narrator John, who calls himself Jonah, and the ways in which his life gets tangled up with a little island called San Lorenzo and with the Hoenikker family, a very strange bunch indeed. While unusual, the book is very compelling, drawing you along despite its meandering, posits, and musings. Though I had a few guesses about where things were heading, I nevertheless still found myself routinely surprised by the actions of those John interacted with. A series of vignettes and conversations push the action on, leading to its ultimate and inevitable end.

I thought the use of the fictional religion Bokononism was fascinating. It provides a fatalistic and rather dismal view of humanity. Though it all depends on one’s point of view. The same could be said of the cat’s cradle: It’s just bits of string, but do you see the cat? The cradle?

One line in particular stuck out to me: “The trouble with the world was that people were still superstitious instead of scientific. He said if everybody would study science more, there wouldn’t be all the trouble there was.”

This presents an interesting notion, particularly if put in the context of our current troubled times. But the book also notes that science alone can’t save us. The folly of man often prevents its salvation, which at its core is what Cat’s Cradle is about: the folly of man and how our lack of good sense can affect everyone and everything around us.

Overall, it’s a fun and interesting read. I didn’t love it as much as I loved Slaughterhouse Five, but I thought it was worth reading.

In other news, rereading Harry Potter is going well. It’s so nice to be back on those familiar shores. I’m currently on The Chamber of Secrets and I forgot how difficult that book is to get into. In many ways I feel like it kind of prepares you for the difficulties of the fifth book what with the awful defense against the dark arts teacher and the school turning against Harry. I forgot how annoying Lockhart is, but he is no Umbridge, that’s for sure. I think the second and fifth books are probably my least favorite; granted picking favorites with HP is like choosing a favorite child. How can you even do that? Every book is great, but some stand out, of course. I do love the mystery of The Chamber of Secrets though and the way the story unravels. It’s very enjoyable.

Until next time!
xx