Have you ever had a dream so vivid and strange that upon waking you’re unsure of whether you’d been dreaming at all? Perhaps, instead, it was some half-recalled memory or distant, bygone thought and not a dream at all. Reading IQ84 by Haruki Murakami was more dream than reality, yet rooted in a style and world so vivid and vibrant as to hint at lucidity. 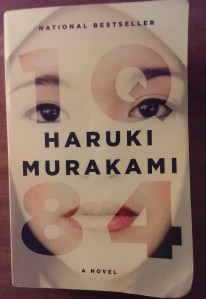 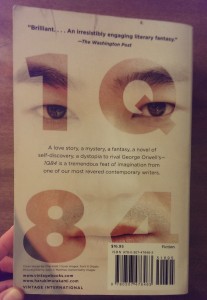 I’ve been a Murakami fan since Professor Shippy had my class read After the Quake in Postmodern Faerie Tales. I’ve never been disappointed by a Murakami novel and IQ84 is no different. In the interest of full disclosure, it is long. It took me a good month to read through. Clocking in at a hefty 1,157 pages, it is easily the size of three novels.

At it’s heart, IQ84 is the story of the connection between two people, Tengo and Aomame, whose relationship tests the boundaries of space and time. It is a story about love, power, and the indomitable forces that govern the universe.  It’s simultaneously a romance, mystery, and fantasy with a smattering of action and intrigue thrown in the mix. The book is set up in a three act structure with three “books” taking place over different months in the year 1984: April to June, July to September, and October to December. Throughout, the point of view switches back and forth between Tengo and Aomame.

A friend of mine described Murakami’s novels as books where nothing really happens and yet you find yourself riveted. He writes fascinating novels with plausible supernatural angles. IQ84 isn’t a terribly action packed novel. It  meanders, moving at its own pace and taking its time getting to the finish line. But that is not to say it isn’t interesting. There are certainly some heart pounding and nerve wracking scenes. A few times I had to put the book aside in my anguish. Yet, the most engaging part of the novel is not the action but the characters, inhabiting Tengo and Aomame’s worlds and minds so fully I felt as if I knew them personally. Murakami also takes his time in acquainting you with the characters, revealing dribs and drabs about their past and personality so that it almost does feel like you’re getting to know them in real time, being slowly fed spools of their lives. IQ84 is a novel to luxuriate in. I enjoyed just being along for the ride, not knowing until the end where on earth (or not earth) we were heading.

It’s hard to get too deep into the concrete details of the novel without giving too much away. I do feel the true pleasure of the book is slowly learning more and more and putting together the pieces of the puzzle. If you’d prefer to remain wholly unblemished and go in with no knowledge, stop reading here. I won’t blame you. I had no idea what I was getting myself into and I think I prefer it that way.

The novel begins from Aomame’s point of view. She is in the back of a taxi on her way to what is presented as an important meeting of some kind. The car is stuck in traffic on the highway and Janáček’s Sinfonietta is playing on the radio. She’s worried she’ll be late for her appointment and her odd taxi driver suggests she climb down the emergency stairwell off the highway and walk to the subway, warning her that “There’s always only one reality,” no matter how things may seem. Aomame climbs down the stairwell in a buffeting gust  of wind and that is where things begin to change, as she immediately notices small but nagging differences between what she knew as 1984 and this world she comes to call IQ84.

Tengo’s chapter begins in a meeting with an editor friend of his, Komatsu, who works for a literary magazine. They are discussing the merits of a particular manuscript that has come in for the new writer’s contest that is not very well written, but whose story shows great promise. Komatsu has a scheme regarding the manuscript that he wants to drag Tengo into, despite his reluctance.

Tengo is a large, lovable character, fairly easy going and malleable. Aomame is somewhat cool and steely in her resolve. They are very different characters to inhabit but equally enjoyable in their depth. The novel explore love, loneliness, sexuality, and the pain of a troubled past and empty family life. It questions the nature of reality and the strange neutrality that can come in the struggle between what is seen as good and evil. As I’ve said, it’s fascinating to observe the paths the Tengo and Aomame go down as you unfurl who they are as people and go along with all its myriad twists and turns. It’s a story that is gripping until the very last page. I cannot recommend it enough.

Until next time!
xx